Where In The World Is CoSchedule? It's Kind Of A BIG Deal... #OverheardAtCoSchedule - CoSchedule Blog

Where In The World Is CoSchedule? It’s Kind Of A BIG Deal… #OverheardAtCoSchedule

When Kathryn and Nathan host webinars, they usually kick things off by asking you gals and guys:

Where are you from? What’s the weather like there?

That probably has a lot to do with the kinds of conversations they have at the office, with their friends, and when they chat with family.

Because… talking about the weather is pretty typical around here.

And when Kathryn and Nathan share where the two CoSchedule offices are located, a lot of you are really surprised.

…why we LOVE it here…

…and how it’s been a massive strategic advantage for CoSchedule (and therefore, a big win for our customers, too).

Where in the world IS CoSchedule? It’s probably not where you’d expect…

In this video, I’m chatting with Shannon Wiedman, CoSchedule’s UI/UX Design Lead. Shannon grew up + loves it here, and she has some BIG things to share with you about CoSchedule’s home state.

You’ll also learn to start where you are with your business dreams (and how that can help YOU succeed, too).

Garrett: Everybody this is … No, that’s not how I do it. Everybody, I’m Garrett from CoSchedule. Stop laughing.

Garrett: I’m Garrett from CoSchedule, and this is #OverheardAtCoSchedule coming to you from our headquarters in Bismarck, North Dakota. Of course, one of the questions that we get all the time is, “What’s a startup like CoSchedule doing in North Dakota?” So I wanted to tell you about it. Shannon is from our product design team, and she is literally the most North Dakotan person on our team. I think it’s because you grew up in a Dairy Queen probably.

Shannon: I sure did. Yeah. You might as well just put me in a sundae.

Garrett: Nice. Small towns all over North Dakota, Dairy Queens. It’s perfect. Shannon, maybe just to frame it for people, where is North Dakota on the map?

Garrett: And a little bit east of Montana. We’re not South Dakota. People often confuse that. Now, small state. We don’t have a lot of population. We make up for it with a lot of giant sculptures everywhere. Shannon, let’s talk about that because I think it’s really important for the people to know about our giant things. 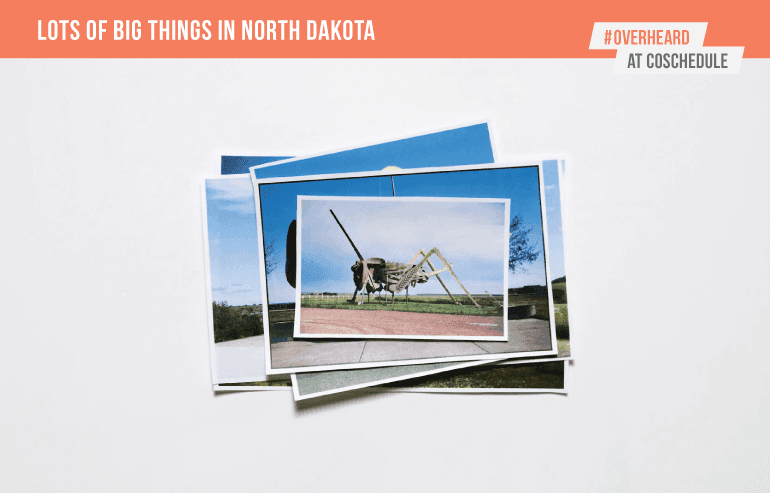 Shannon: Yes. It really is. We have a giant cow, Salem Sue. We’ve got a giant buffalo, a giant turtle, a giant walleye. We have a whole highway full of giant things like mosquitoes, and tin men, and-

Shannon: Geese. It’s the Enchanted Highway. It’s great. We have a lot of big sculptures.

Garrett: I don’t know if you know this, but I grew up in a very large city. It was the 10th largest city in North Dakota.

Shannon: Really? How big was it?

Garrett: Small state, but we make it work. Now, tell me about, Shannon, about working in a startup in North Dakota. What do you like most about that and being in a rural state?

Shannon: Born and raised in North Dakota. Family is here, so it’s nice to stay in my home state and also have the opportunity to work for this awesome startup here in North Dakota without having to jump ship and leave North Dakota because I love it so much. The community support is just great in this state. 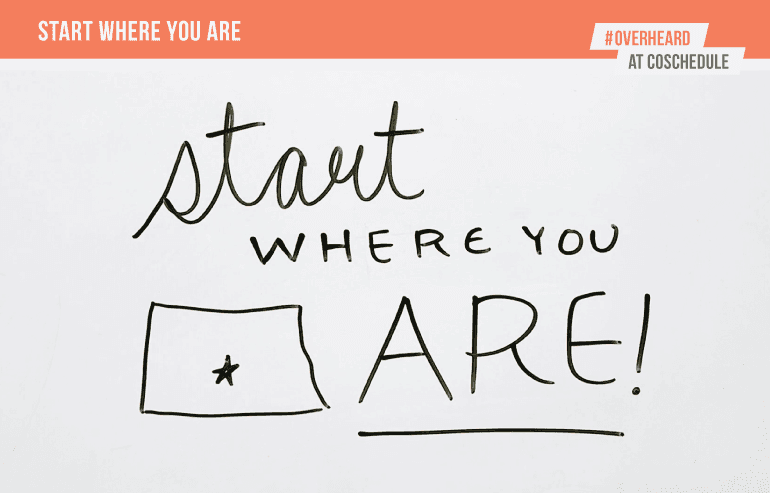 Garrett: Yeah. It’s truly actually been one of our greatest secrets in many ways. I wrote a blog post a long time ago called “My startup is in the wrong city.” It was about starting just wherever you are and not worrying about geographic location. I think it’s key, and it’s important

Where in the world IS CoSchedule? It’s probably not where you’d expect…

The 10X Marketing Formula is finally here! If you’ve been following CoSchedule for the past few months, you might know it’s our CEO and co-founder Garrett Moon’s new book. It explains […]

What’s Hot For Marketers In 2018? | #OverheardAtCoSchedule

We’re just a couple months into the new year. For marketers, that means we’re kicking new strategies and tactics into high gear. And for CoSchedule, we’re looking ahead to new […]

How CoSchedule Says Thank You | #OverheardatCoSchedule

2017 was a big year for CoSchedule. We rolled out tons of new features. Our team has grown exponentially. And we even opened a brand-new office for our Fargo-based crew. […]