Code that can be added to web pages so that search engines can understand what that page is all about. The search engines can then display the information of the page properly on the results page so that readers can find the content they want easily. This may also help with search engine optimization (SEO).

Schema structured data markup makes it easier for customers and web searchers to find the information they need quickly. Many companies want to make sure their information is seen by potential buyers, and schema markup helps that happen.

SEO specialists are debating on whether pages with schema markup rank higher on SERPs, which could boost traffic to their sites. After all, if a page looks like it has the information the readers wants, they’ll probably click to learn more.

Even if you’re not too sure on how schema markup works, chances are you’ve seen it in action. Below is an example of how these webpages have used schema markup to showcase valuable information. 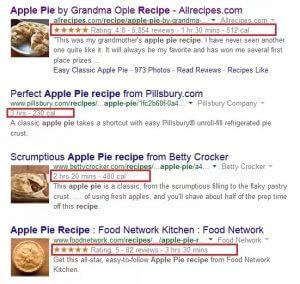 These sites made sure details about their apple pie recipes showed up in the search results. The highlighted portions are what web developers decided was important information for readers to know so they could decide which recipe to click on. That’s what was added to the schema markup. Now, depending on the time commitment or how many calories each pie has, a customer could click on the recipe they want, which boosts traffic to that site.

There are a number of tools developers can use to make and test the schema they want to add to their site. They do all this in the hope of getting the right information in front of readers that will click on their content.

CoSchedule is an industry-leading marketing management and editorial calendar platform. It’s mission control for your entire marketing team to help you organize every project in one place.

Ready to test your marketing knowledge?

Take this quick quiz covering a dozen fundamental marketing terms. Then, share your results on social media and show off your marketing smarts.

Which term describes the intentional alignment of content with marketing and business goals?

Which term refers to the total monetary value of retaining a single customer over their lifetime?

Which term describes the phases of the buying cycle from unawareness of a product all the way through to making an actual purchase?

Which term refers to promoting a single message or campaign across multiple channels?

Which term below is not considered part of the marketing mix?

Which term describes the core benefit or solution that differentiates a product or service from the competition and positions it as the best possible option on the market?

Which term describes content from the web that has been sorted through and shared on a brand’s digital platforms?

Which term describes the process of building interest in a product or service and developing a potential customer base?

Which term describes a measurable data point that helps prove your organization is on track to meeting its goals?

Which term describes focusing on actions and tactics that can improve results by 10 times, rather than merely by 10%?

Which term describes the path a potential customer takes to buying your product?

Which term describes a simple character description of a company’s target customer?

You scored out of 12 correct answers.