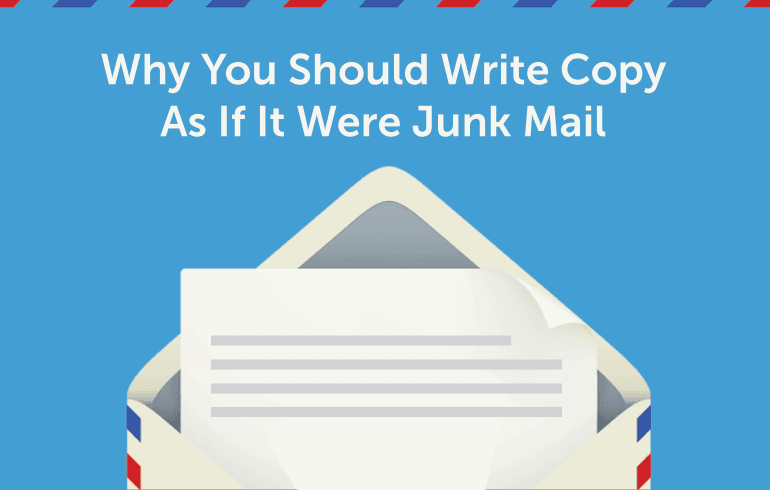 Are you ashamed at how vulnerable you are to junk mail? Direct response letters are part of the pantheon of junk mail. Or at least, that’s one way to look at them. They are those letters that arrive that sell a product or solicit a donation from you, the main reason the postal service is probably still in business. Yet direct response letters are an example of copywriting that can be extremely effective in getting your reader to take action. And, in that sense, they are not junk mail. They’re a copywriting gold mine.

In the 20th century, Bill Jayme’s direct response copywriting (via mail) was second to none. He was the king of the direct response mailed letter with clients lining up to pay him to write their letter. One of his better-known examples was something he wrote to help launch the magazine Psychology Today. Jayme also wrote the copy for the envelope, and for this particular piece, he posed a provocative headline: From Mike Capuzzi’s blog post on provocative headlines. The envelope needed to be opened, just like your marketing emails need to be opened, just like your blog posts need to be read. Jayme wrote a headline that piqued curiosity, and then combined it with a free take-it-now psychological test and another free offer. Whether a person answered yes or no to the question was irrelevant. It got them in the door. Marketer Gary Elwood suggests that Jayme was successful with his direct response copywriting because he took an unorthodox approach combining both the visual design of envelopes with powerful copy techniques that included: Jayme was fond of empathy as a selling technique. This is evidenced by how he started most letters with “Dear Reader.” Empathy, incidentally, requires a far better understanding of your audience than mere demographics. Demographics tell you who the reader is and what they’re interested in. Empathy taps into understanding what the reader wants.
For Further Reading:

Clearly, direct response “junk mail” is powerful, even if we think it’s cheesy and doesn’t work. Because it does work, even on marketers who know what’s up. John Jantsch, from DuctTapeMarketing, pulled together some examples of sales letters, and extracted the foundation of what made them tick: With those three characteristics in mind, Jantsch dissects sales letter samples. I’ve summed up the sales copy approach with a template so that you can see the method distilled down.

“If Your Name Is On This Letter”

In this example of a letter from Newsweek, readers were encouraged to subscribe to the magazine. This type of sales copy, according to Jantsch, feeds into reader vanity. It suggests there is exclusivity at work and that the reader, should the offer apply to them, is special. Otherwise, if the offer isn’t of interest to them, they are common. This copy relies heavily on the second person (“you”), and often starts out describing what isn’t (the negative) instead of what is (the positive).

Click To Tweet
The first paragraph assures readers they are special (“your education and income set you apart from the general population”). The letter then proceeds to tell readers that subscribing to Newsweek won’t make them rich, won’t give them more friends, or give them a better job. At this point, readers are curious as to why they should get the magazine. The sales copy responds to that question by showing how the magazine can satisfy curiosity, reduce the boredom of small-minded conversation, and expand knowledge of what’s happening in the world. It then presents an offer that reduces risk by letting readers know they can get money back.
Reader, you’re special. That’s why we contacted you. We’re not going to lie about what our offer will do for you. But we will enrich your life. If you don’t like it, we’ll return your money.

The next example Jantsch uses is from the Wall Street Journal. This direct sales copy uses a story (which readers love) to promise readers success if they buy (and suggest a warning if they don’t). The Wall Street Journal starts with a simple paragraph telling the story of two young men who met back during a 25th college reunion. One man was a success, the other was not. The letter then proceeds in sections, outlining what made the difference between the two men (knowledge provided by the publication, in this case), and how that applies to the reader.
Read this interesting story about two possible outcomes. We’ll tell you why this happened. We’ll show you how our offer will give you the better outcome. We’ll reiterate, one more time, why those outcomes were different. And then we’ll make you a risk-reduced offer, and remind you again of the story.

The third letter example in Jantsch’s ebook is from Popular Mechanics, and uses a couple of unique things. The letter itself has a visual box at the top, filled with brief copy that establishes whether the reader is the right audience using vanity and rather obvious qualifications we all want to assign to ourselves. “If you want to live better, don’t mind hard work, like to pay your own way…” The rest of the copy works very hard at appealing not to the elitist, but to the “average Joe”.  It’s filled with homey phrases that promote elbow grease, hard work, and flag-waving.

Write to sell: Appeal as understanding, offer just for them, give away a bonus for free.

Click To Tweet
Popular Mechanics knew its audience pretty well, and they knew this would be best way to elicit trust and provide a sense that they truly understood what their readers wanted or thought. In this case, it was an illustrated handyman guide, and the selling points were how it would save you money by showing you how to make repairs yourself, that it was easy to use, and it was for readers “just like you.” To cap it off, the offer included a free first book, no strings attached, telling you what kind of projects you could find on specific pages in that first book.
We understand you perfectly, and we made this product for readers like you. It’s so good, we’re giving the first one away completely free.

This letter example, from American Express, relies heavily on exclusivity. More than anything, we all like to know we’re good enough to be part of an elite and exclusive club, and (shamefully) that other people won’t get in. Compared to the other letters, this letter isn’t particularly long. It’s main punch is in two sentences in the opening paragraph, making a point to say that not everyone who applies to get the card will, and that such a card isn’t for everyone. The rest of the letter is a list of the perks and benefits the card provides.
We’re exclusive, and not everyone gets in. You’re lucky we’re inviting you in. Look at all the benefits you’ll get. We expect you’ll apply now.

“A Story About Grandmother”

Using the story approach, this letter writes in first person and tells of memories of grandma. It’s very personal and approachable, and draws the reader in immediately. This letter is for Prevention magazine, and uses memories of healthy food vs. chemical-laden food, and the need to better understand how things had changed since the time of those grandma memories. The reader then learns about how the magazine can help them, being quite direct as to how it will make their lives better. In some sense, it taps into fear, suggesting that even their doctor isn’t telling them all they need to know. For all of us, the fear that we are being kept in the dark is a highly motivating one. The letter closes with bonuses that the reader could receive, and Jantsch notes that some people will buy based on the bonuses they get when making the initial purchase. So do offer bonuses.
Let me tell you a personal story. Then I’ll tell you why you should be a bit afraid. But don’t worry; I have the solution. And, if you buy, I’ll give you lots of great extras!

Direct sales letter writing techniques are directly applicable to your landing pages, of course, but also some of your blog posts. Challenge: The next time a direct sales letter arrives, don’t throw it. Dissect it. Figure out what they are doing in that copy, and what makes it work (or fail). Or, do some online searches and find more examples of direct response letters, or landing pages that employ the same techniques. These are just a few questions to ask as you figure out what makes direct response copy work.

How To Use Junk Mail As Your Direct Response Copywriting Jackpot

How do you make your direct response copywriting work?

We also think you'll like...
How To Organize Your 2023 Email Marketing Calendar The Best Way (Template)

Successful email marketing is all about consistency and delivering the right message, to the right audience, at the right time. How do you keep all your email content scheduled and organized […]

Kendra Corman is the founder of H2H Consulting: a marketing agency that helps businesses get a return on investment with their marketing and advertising. Coordinating blog posts, multiple clients, and […]