How To Get Started With Twitter Video Marketing - CoSchedule Blog

There’s a lot of talk about social media video these days. However, sometimes Twitter gets overshadowed in that discussion by Facebook and other rivals. That’s a shame, because the platform has done a lot to create new opportunities for social video marketing.

If Twitter is keeping pace with social media video trends, then marketers and content creators should be too.

Think you don’t have video skills? No problem. You’ll feel like the next Spielberg by the time we’re done.

To help with your video projects, download our free video script template: 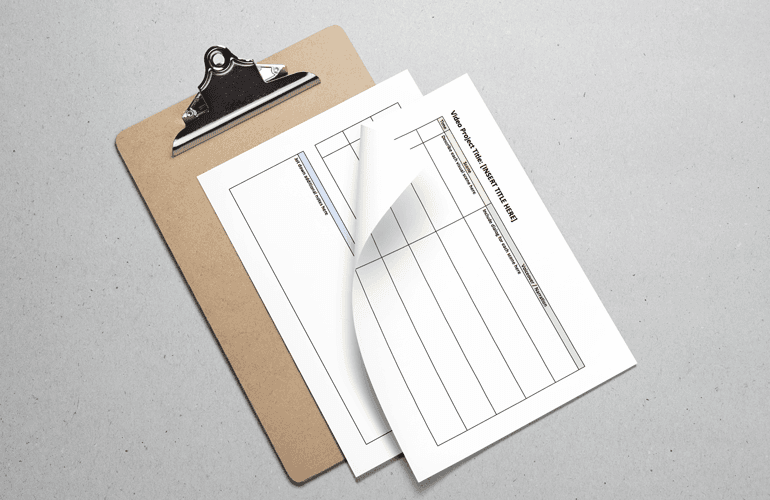 That should settle any skepticism. Despite these stats, not all brands are creating Twitter content. That means more opportunity for you to stand out.

Did you know 82% of users watch video on Twitter? 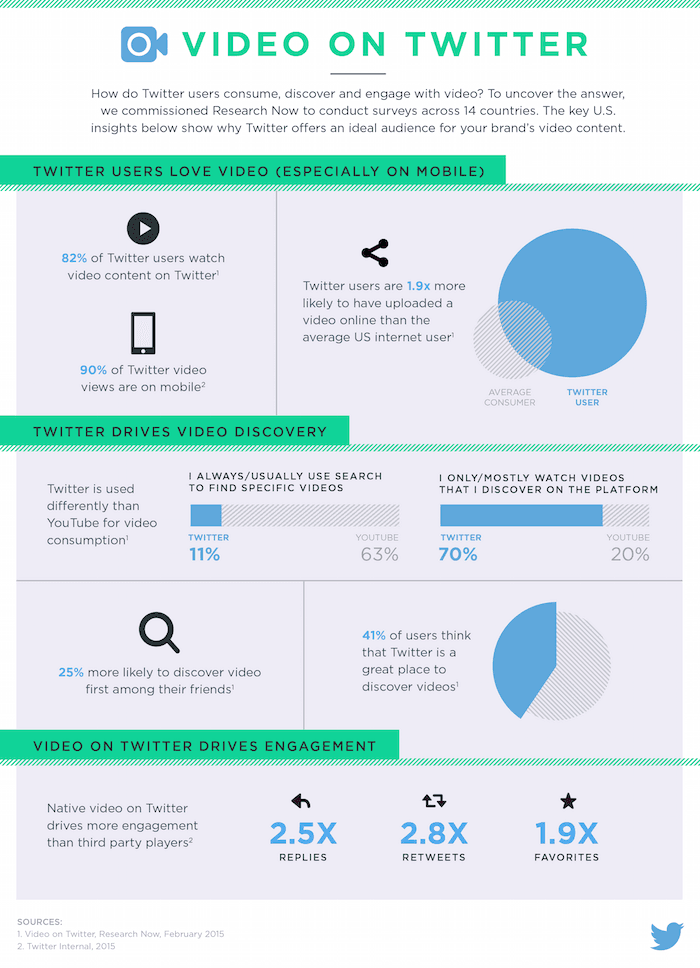 Let’s walk through how each method works.

How To Shoot Video Using The Mobile App

Shooting video directly in the Twitter mobile app is simple. Here’s how it works:

2. Open a new tweet window and press the camera icon:

3. Next, select the video camera icon:

4. Then, hold down the button to record your video: 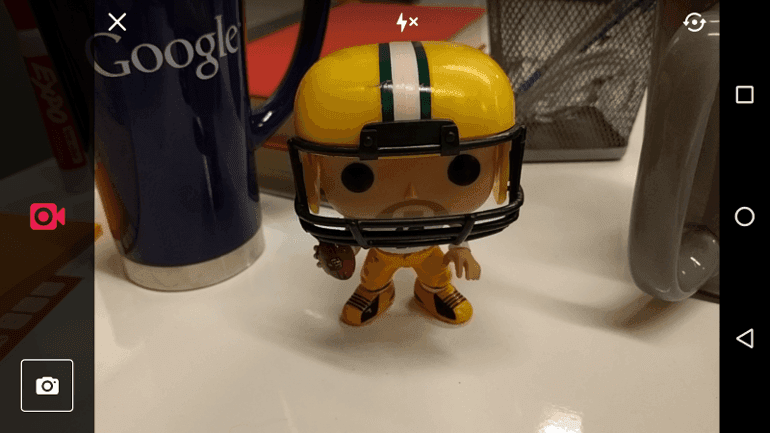 Once you’ve shot your video, you’ll be able to upload it directly to Twitter.

These screenshots were taken on an Android device. However, the steps are the same for iOS users (the icons just look slightly different).

How To Import Video From Your Phone

Importing video from your phone to Twitter is easy, too.

1. Open a new tweet window and select your video: 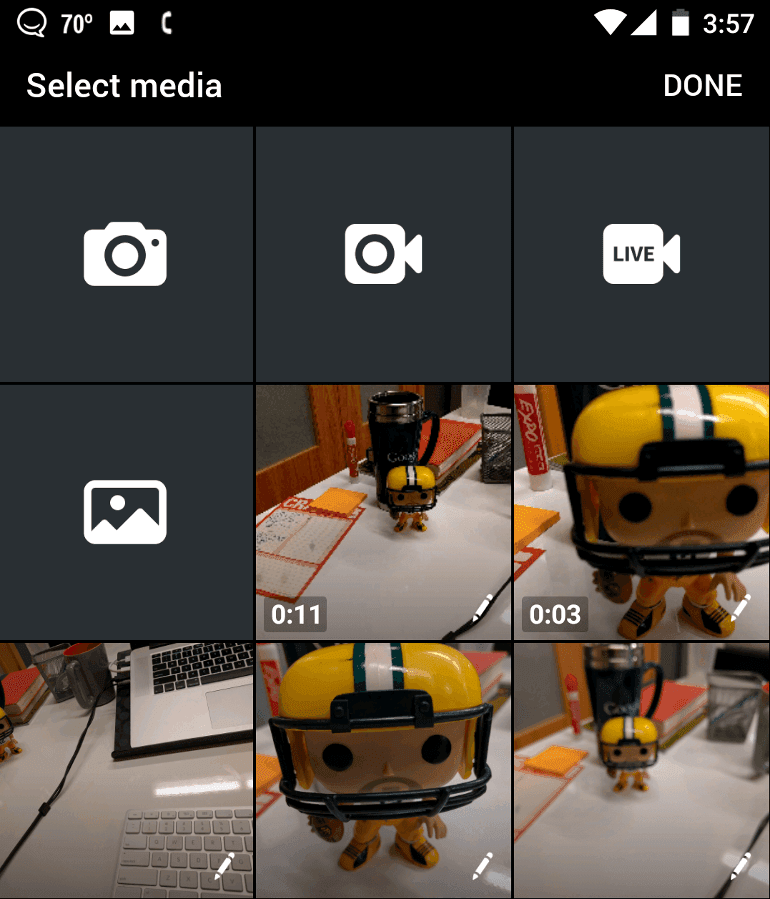 2. Next, you’ll have an opportunity to edit your video: 3. Finally, write your post copy and publish your video: 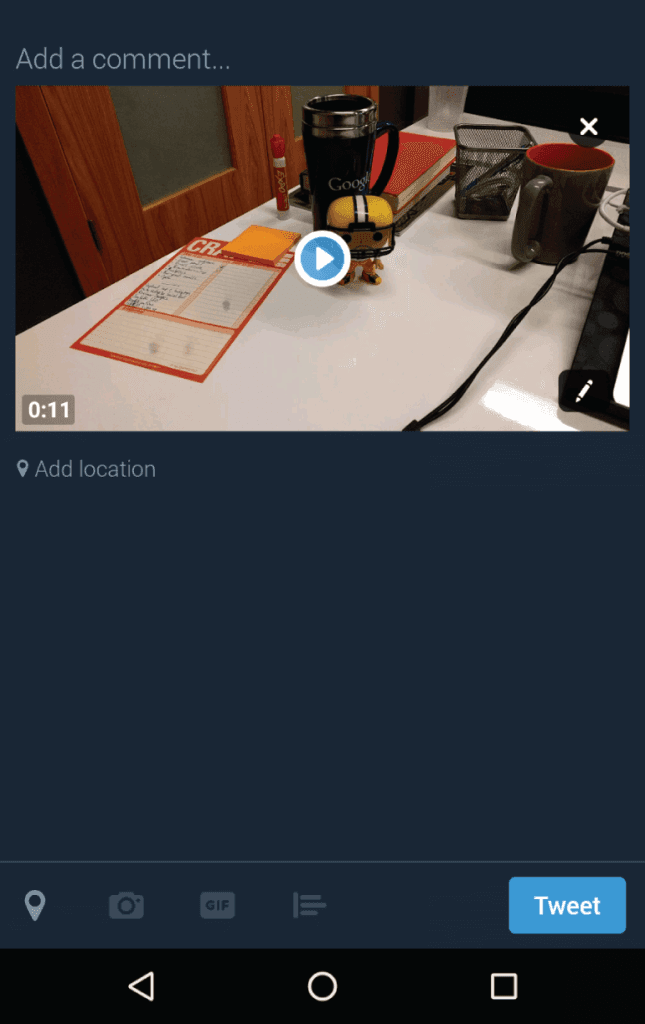 What if you have a video file you want to share on Twitter? That’s easy enough as well.

2. Select your video from your available media: 2. Find a video file to upload:

3. If your video is longer than 2:20, you’ll need to edit it down. Fortunately, Twitter makes it easy to select which portion of your video you’d like to post. Click and drag the blue tab left or right to make your selection: YouTube videos look great on Twitter as well, and you don’t need to do anything more than paste your URL.

Clicking the thumbnail then expands the video player: What Are The Pro’s And Con’s Of Video On Twitter?

Twitter's mobile app has cool applications for shooting video in the moment.

It depends. Before making a decision, you’ll need to weigh some pros and cons.

What Are Twitter’s Technical Requirements For Video?

What Equipment Do I Need To Succeed?

You just need a phone or a camera, right?

Sure, that’s a start. But what about mics? And what kind of camera? Does it matter if you have an iPhone or Android device?

Let’s run through your options.

iPhone Vs. Android: The Eternal Debate

If you plan on shooting mobile video, either iPhone or Android smart phone will work. Windows phone users can’t shoot in-app video, but you can always use your phone’s video camera, and then upload the file via the Twitter app.

How Can I Get Better Sound?

Smartphone mics are decent enough for basic purposes. If you want better audio quality though, external microphones can help. There are also some simple tactics you can employ. This video from StoryGuide offers an excellent primer on improving smartphone audio recording quality:

Got The Coffee Shakes? Get Yourself A Tripod.

If you’re handholding your phone while shooting video, some shakiness is inevitable. For those times you need a steady shot, though, a tripod can help. A search for “smartphone tripod” on Amazon gets more than 500 results, ranging in price to fit your budget (disclaimer: Amazon didn’t pay us anything for this link). 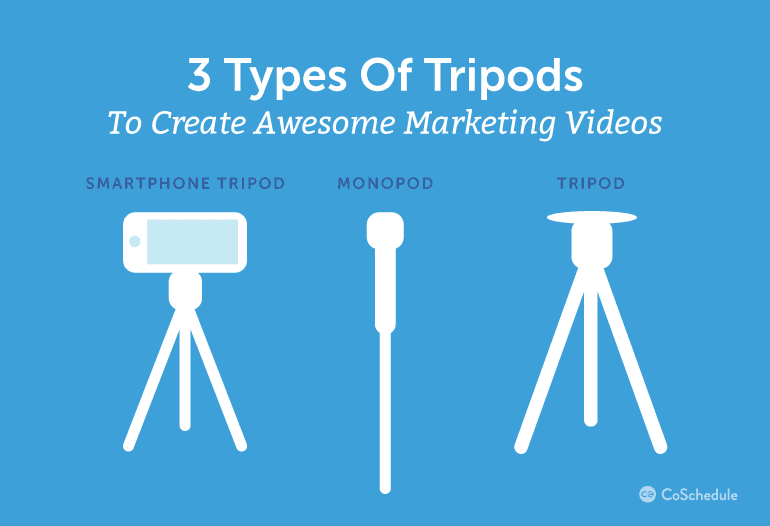 What About Editing Software?

If you plan on editing your videos outside the Twitter app, and then uploading them later, you’ll need editing software. Windows Movie Maker (Windows) and iMovie (Mac/iOS) are both more than good enough for basic needs.

Recommended Reading: How To Do The Best Content Marketing On A Limited Budget

Which Types Of Marketing Videos Should I Shoot For Twitter?

Now we’re ready to actually shoot some videos. But, what kind of video will you create? We have some ideas to share.

How-to videos are essential for any content marketing video strategy. Twitter is no exception. Shoot videos that quickly show people how to do something useful. Check out this video from Home Depot:

Video is key for helping customers do product research. If you have a new product line, service, or feature, shoot a quick video showing how it works.

Here’s an excellent example from Google:

Capture and share VR photos with #CardboardCamera, now on iOS as well as Android. https://t.co/H4muxNBCSD pic.twitter.com/RFpcVMIyPx

People love getting behind-the-scenes looks into brands they enjoy. It humanizes your product and helps people build a connection with who you are, and what you do. Twitter for Video is perfect for capturing candid moments around the office. That’s what online retailer RealTruck.com did when they held their own “Office Olympics”:

Recap video of our office Olympics. Fun was had by all! https://t.co/GEb5WLavxP

What is it like to work for your company? Show people! That’s what Amazon did in this example:

Have you ever wondered what it is like to work for Amazon as a Software Development Engineer (SDE) ? VIDEO https://t.co/D5aITyVUZC #awscloud

Social media is important for customer service. In fact, some brands are even using video to respond to customers. Next time you get a tweet from a customer, shoot a quick video response. It gives your communication a personal touch, and the extra effort will be appreciated.

If you have a sale or promotion, draw attention with a video. Here’s how Gamestop did just that:

Do you have a partner or cause you want to shout out? Do it with a video. Take a cue from Zappos here:

Happy Birthday to the National Park Service! 💯🏔 Get out there and #FindYourPark!#NPS100https://t.co/qDS4K68Fvl

Contact an influencer or subject matter expert, interview them, and get it on video. Then, share a clip on Twitter. Watch how Mention pulled this off:

If you’re hosting an event or attending a conference, shoot a video and show people. Here’s one from Idealist:

Had a great time at the @Idealist Grad Fair last night! How about you?!? #gradschool #goals https://t.co/ThWHlf74by pic.twitter.com/iLQB4jPMFn 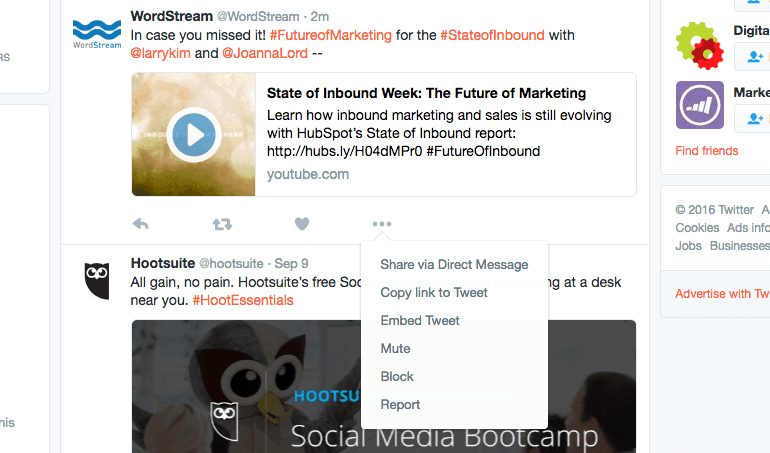 3. Copy the embed code and paste it into your content's HTML: 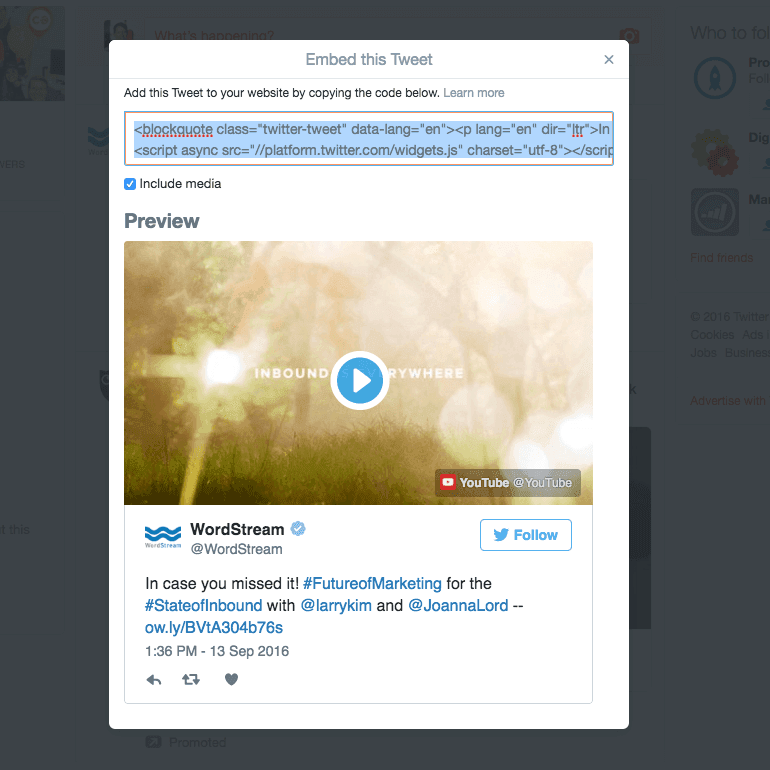 4. If you're embedding your tweet into WordPress, paste the code where you'd like in the Text editor:

The process is mostly the same here. The only difference is you can choose to either embed the entire tweet (video, text, and links), or just the video: Here's what this video looks like on its own:

We'll defer to Twitter themselves for this one with this handy infographic: 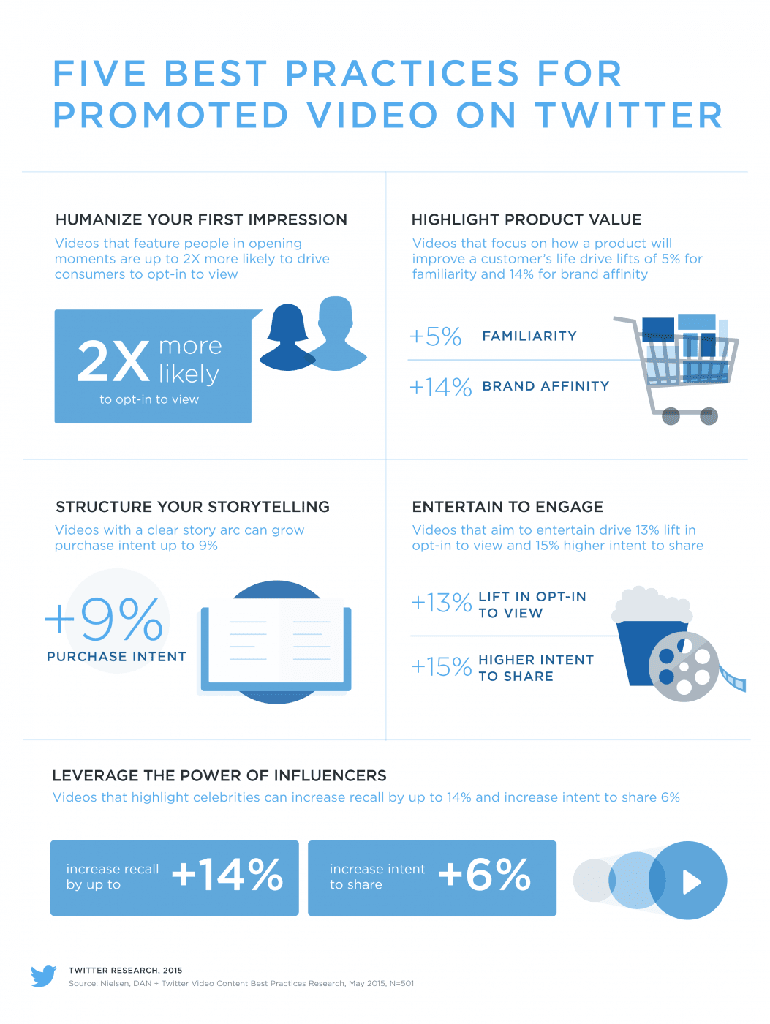 Recommended Reading:
How To Write Like A Journalist To Be A Better Marketing Storyteller
How To Use Social Media Analytics To Create The Best Content
How To Generate Better Social Media Campaign Ideas Like A Creative Genius

Did you know you can schedule and publish Twitter videos in CoSchedule? We launched our Social Video feature just last week. It’s something we’re really excited about, and should make creating and scheduling video tweets a whole lot easier.

Here’s how it works:

Did you know you can schedule Twitter videos with CoSchedule?

That covers what you need to know about Twitter video marketing. Is there anything we missed, or any lingering questions you’ve still got? Let us know, and we’ll do our best to answer.

Ben is the Inbound Marketing Director at CoSchedule. His specialties include content strategy, SEO, copywriting, and more. When he's not hard at work helping people do better marketing, he can be found cross-country skiing with his wife and their dog.

Content Creation Process: How to Focus on Quality and Consistency

Today, content runs the world. From entertainment to news to marketing, getting your message out there has never been more important. Unfortunately, with everyone under the sun attempting to have […]

“Oh no! We don’t have any content ready to go out next week. What should we do?” That’s a phrase every marketer dreads to hear. Without proper tools for organizing […]

How to Write an Awesome Creative Brief [Templates + Examples]

So many marketers still underestimate the value of doing “upfront” work. I’m talking about the work you do at the beginning of a project to make the middle and end […]