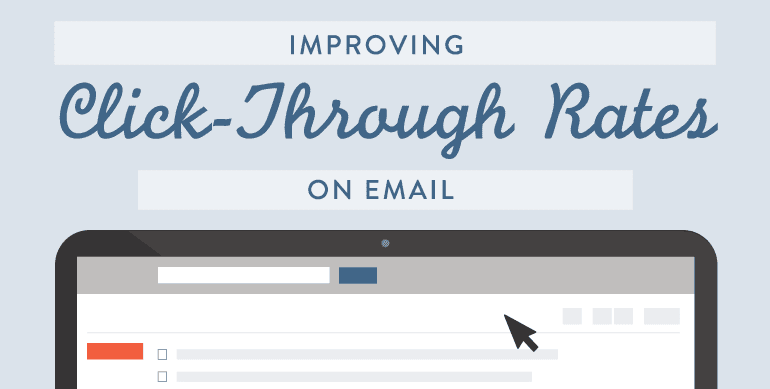 Recently, we shared what we learned through A/B testing our email subject lines over the course of several months. We showed what worked and what didn't, and what kinds of subject lines were the most likely to get opened. A reader then suggested that we provide similar data, but not just on subject lines. What were our readers doing once they opened the email? Were they clicking to articles? We thought this was a great question, and decided to look at the same set of data, but this time focus on what readers did once they opened the email.

Our weekly Content Marketing Update email has no complete posts in it, meaning that if a reader wants to read what we've shared in the the email, they must click on something. We share the post title, a small graphic, and a summary of the post. We have a CoSchedule update or featured item with a gray background, and then below that, links to at least three interesting blog posts for the week. This is what our email looks like. We send it out every week, on Tuesday.

Though we didn't A/B test our emails based on the click activity that happens once an email is opened, there are still a few things we can learn about what people do once they open an email. In the table below, we use the same emails from our earlier post. You can see the date of the email, and the subject line of the email. We are only showing the subject line that "won" the A/B test. So, what did we learn?

What is considered to be a good click rate?

Let's look at some standard benchmarks to get a better idea at what email click rates are, based on the industry. MailChimp has compiled the data from their users, breaking it up by industry. According to MailChimp, for marketing and advertising: According to MailChimp, for software and web app emails: MailerMailer did a similar study of their own data, and found that marketing and PR emails generally had about a 15% click-to-open rate. Constant Contact's numbers hover around the same level, too. And, according to the 2012 Silverpop Email Marketing Metrics Benchmark Study, email open rates in general average about 20%, while click rates, once that email is open, drop to 5.4%. Our open rates average at 20%, which is in line with these averages, but what about our click rates? Even though the average click rate is at 5.4%, we set the bar a bit higher and consider a 20% click rate of those who open an email to be a good, typical rate. Our average rate, across these three months, was a 25% click rate. That's pretty good! Ideally, you'd love to see more than one click per reader, meaning that they are more engaged with your email content. Our average, across these three months, was 1.9 clicks per person.

Was the most highly clicked link the same as the post referenced in the winning subject line?

An email with a variety of topics gives every reader a chance to click.

Click To Tweet
Our emails feature the blog posts from last week, as well as links to outside blogs. Part of our editorial calendar planning is to make sure we don't talk about the same topic the entire week, which happily leaves us with an email that can attract a wide variety of readers. We also curate links that are of interest to a variety of readers, too. In other words, the email has something for everyone. That helps click rates, no doubt.

Which links got clicked the most?

The first three main links in our email feature: One of these three links would match the subject line, and one of these three were the top click-getter no matter what else was in the email except one instance (August 5–that link was our gray featured link, and was of a popular old post). Having the top geographic location in the email didn't necessarily mean a guaranteed click, though. As you can see in the chart, it's an even split; 50% of the time it was, and it wasn't. Regarding how other links fared, remember, the first three links do not require scrolling to see. It is worth noting that the curated gray headline links without images and located lower on the screen (requiring scrolling) got the fewest clicks. Was it location? Color? No image? The fact that they weren't our content? My guess is location and lack of graphics.

Were the links that were clicked also the links people shared on social media?

You really can't be certain that what our readers clicked they actually read, and that they were the ones who shared it. But let's take a look at the numbers and see if there's anything of note, any kind of pattern. And let's add their emotional marketing value (EMV) to the mix to see if there is a propensity to click/share posts that have headlines with more emotional value. In trying to determine any sort of connection between high EMV and high clicks, where a high EMV is one greater than 40 and high clicks are greater than 300, the data reveals that: This pretty much means nothing. Having a high EMV on your headline, according to this table, only marginally increases your clicks. Shares, EMV, and clicks have, based on this quite limited set of data, very little connection to each other. The posts with the asterisks were shared by Buffer with their users, and received a high amount of shares.

Every time I start to dig into data, I'm amazed at how many questions you can ask. For example, does the color of the graphics have an effect? Should we switch the layout of the email to get more clicks? Do people like square graphics rather than round? Do clicks fare better in winter than in summer? Should we have more copy beneath the headlines to indicate what the post is about? As always, a larger data set helps clarify what you're looking at, and starts to establish the patterns and connections you can make. This was really too small of a data set to attempt to make any broad conclusive statements, though I am leery of ever making any pronouncement that a reader might take as gold. As always, you must do your own testing and find out what is true for your readers in your data. We recently began sending out an email that alerts recipients to whenever we publish a blog post. Over time, it will be interesting to see both how that email and list fares, as well as if it will affect the larger weekly email click rates since some those recipients also receive this weekly email, and may have already read the posts earlier.

What have you found that helps improve your click rates in your own emails?

We also think you'll like...
30 Email Subject Line Examples To Inspire Your Own

64% of folks read an email’s subject line to decide whether to open it. Meaning: your email subject line must be catchy enough to get recipients’ attention and convince them to read […]

Having the best social media marketing examples in your idea vault is an excellent way to develop new ideas for your next campaign. You can always blend two ideas together […]

Megan Jeromchek
January 27, 2023
How To Write A Blog Post: The Easy 3-Step Process That Will Attract & Influence Your Audience

Tasked with writing a blog post and looking for a place to start? You’ve found a good source. A lot of blog posts on the topic (pretty meta, I know) […]