How To Write Better Content In A Competitive Blog Niche

How To Write Better Content In A Competitive Blog Niche 79

Earlier this year, we took a survey of you, dear users, and asked about some of your content marketing pain points.

Here’s what you told us, in order, were the top three hand-wringing struggles for you:

I second these pain points; I’m with you.

In other words, how do you define “good content?” 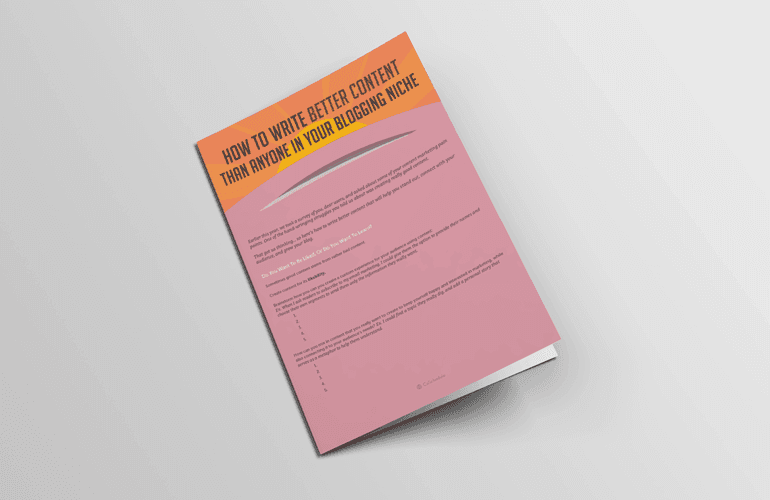 When I studied art in college, I found that, at the end of college, I had come to view a piece of art as a success based on two things:

Whee, do I have some uuugleee pieces of art.

“Just light that match. Put it out of its misery.”

But those flaming monstrosities taught me something useful and helped me make future likable pieces.

I’m guessing, for the most part, that when you told us you wanted to write better content, you were mainly talking about its likability. You want your audience to like it, talk about it, share it.

But here’s the dangerous thing: You can consistently create good content (and good art) without learning anything new. And as a content marketer, failing to always keep learning means one day you are suddenly eons behind everyone else, even though things had been quite successful up to that point.

By failing to learn, one day you are suddenly eons behind everyone else. #blogging

My painting style has changed considerably from college, for example, but I know of another artist from the same background whose style has remained pretty much the same in the past twenty years. There’s nothing wrong with that; her art is quite popular with the public, has a loyal following, and it clearly hits the likability zone. Because her style hasn’t changed much, her audience knows exactly what to expect, and it is a profitable audience. Her art is easily identifiable and has helped establish a kind of creative “brand” for her. It’s admirable.

But it can also be predictable, and tiring. If you hold teachability (i.e. learning from mistakes and taking creative risks) as an aspect of your definition of “good content”, you will likely see changes in what you create. You will see your audience fluctuate and see dips in your measurable numbers, but you will constantly be pressing into fresh water instead of the same pool.

So. Do you want your content to be liked? Or do you want to learn?

These two aren’t always exclusive of each other, but in quite a few situations, they are. I would posit that if you want to be a great content creator in the long haul, you have to sometimes give up on your content always being liked and accept the dogs that come from your pen. Those new dogs can teach you something.

Sometimes, the best #ContentMarketing comes from your failures. Learn from them to improve.

Once you are willing to take a leap and write outside of your current state of likability, you’re ready for the next step.

Do You Remember To Look Up To Others?

Our own Content Marketing Lead, Nathan, prefers a particular technique that requires a bit of online research to find the top performing content in your niche. “There are a few ways to write better content, but I only really use the skyscraper technique,” he’s told me, and it makes pretty good sense.

As Garrett outlined on an earlier blog post, the skyscraper technique is, at its most basic, a three-step process:

It’s the second step, I’m guessing, where the questions lie. How do you write “better” content than someone else?

As Garrett points out (and as I’ve mentioned before), you have to dissect the content. (Who knew dissection was such a thing for content marketers!) He suggests looking for:

You might also consider other more abstract aspects of the content as to what makes it a success, such as:

Essentially, you are trying to figure out what makes a winning, popular, and successful piece of content tick. If it’s outside of your usual style or approach, this will be challenging. You’ll have to rethink why that piece of content is so good.

One thing that’s important to note is that if you are trying to track and rate content, you are going to have to create standards (your own, or someone else’s recommendations) and assign numerical values for anything that is abstract in nature. For example, Garrett suggested you assign, on a scale of 1–10, a quality rank. Perhaps you define quality based on typos, grammar, whitespace, unique research, interviews, or some other characteristic. Whatever scale you use, and whatever standards you set for yourself, you will need to be consistent.

Research what content already exists, then plan to #write something even better. Here's how.

Once you figure out why a piece of content did so well for someone else (and you have concrete measurements even for the abstract), you can be that person who always has to top everyone and who goes and writes even better content.

Are You Always Scanning The Horizon?

My first car was a Chrysler Plymouth Horizon, and if I wanted to get good radio reception, I had to roll down the front passenger window. Fine in the summer, excruciating in the winter. In order to bear the cold air, I had to turn up the heat. The heater fan was so loud, that I had to turn up the radio. It was a vicious cycle that meant, by the time I pulled into the yard on the drive home from school, I was one of those ridiculous people whose radio is so loud that all the plastic parts of the car are rattling.

Take a look at this beauty.

That is not the Horizon you should be on the lookout for.

In the previous step, you were to look up to individual examples of top performing content, figure out why it was up there so high, and do your own version but better. Most bloggers have peaks and valleys of content success; you might have found a few one hit wonders in your skyscraper analysis.

And then there are bloggers who are consistently creating good content. They might have had a few skyscraper pieces, but maybe not. What they generally have is authority, and authority is less susceptible to peaks and valleys, and more even-keeled.

How do you become an authority on something?

JERRY: So Biff wants to be a buff? ... Well sleeping less than 18 hours a day would be a start.

—From Seinfeld “The Boyfriend (1)”

Let’s take that approach, then, with the idea being that you first have to be an expert before you can be an authority.

What does an expert look like to you? For me, it’s someone who:

You can become an expert, then, by hard work, constant learning, willingness to make mistakes, and an openness to talking about what you’ve learned and what you’re still learning. Reading books, taking classes online, attending conferences, working a job where you gain experience, finding a mentor, teaching others so you learn as you teach, and having the patience to stick with it over time—this is how you build expertise.

Being an authority is almost a state of being where people have given you permission to direct how they think. That sounds a bit creepy, but it’s not far off. You can holler and scream that you are an authority all you want, but if no one is listening to you, it’s clear you are not.

How do you get people to give you permission to be an authority over them in your niche?

This is a bit tricky. Authority isn’t necessarily being well-known (though it can be), but is that peculiar state where people stop and listen when you start to speak.

How Will You Write Better Content To Stand Out From Your Competition?

In summary, there are a million ways to approach the question, “How do I write better content?”, but for this post, I wanted to give you a three-step personal assessment:

There are so many great content creators out there. Which do you consider to be an authority, and why?

How To Write Better Content In An Oversaturated Blog Niche

PS—Don't miss out on your free 'How To Write Better Content' guide to help you create really good content!

I don’t intend to make this article clickbait-y, so here’s the answer right away: no, online clickbait headlines are not dead, but they’re a dying breed. Just a decade or so […]

Emotional Headlines: How to Write Headlines Guaranteed to Earn the Most Shares

As you probably already know, headlines can make or break how your content performs and represents your brand. In fact, statistics show that eight out of ten people will read a […]

How to Write Advertising Headlines Like These 8 Awesome Examples

Writing good advertising headlines is 80% of the sale, or, as David Ogilvy famously said, “When you have written your headline, you have spent eighty cents out of your dollar.” […]