What comes to mind when you think of marketing? Commercials, ads, and PR stunts, right? It’s easy to forget that marketing is a centuries-old practice. In this post, we’ll look back to explore the history of marketing and how it has changed over the years.

The Evolution Of Marketing

Marketing has come a long way since its early days, but its basic concept remains– to promote a business’s products or services. In the past, marketers relied heavily on impersonal, broad campaigns such as print ads, TV commercials, and billboards. Now, marketing is a game of building authentic relationships, earning customer trust, and targeting a niche audience. 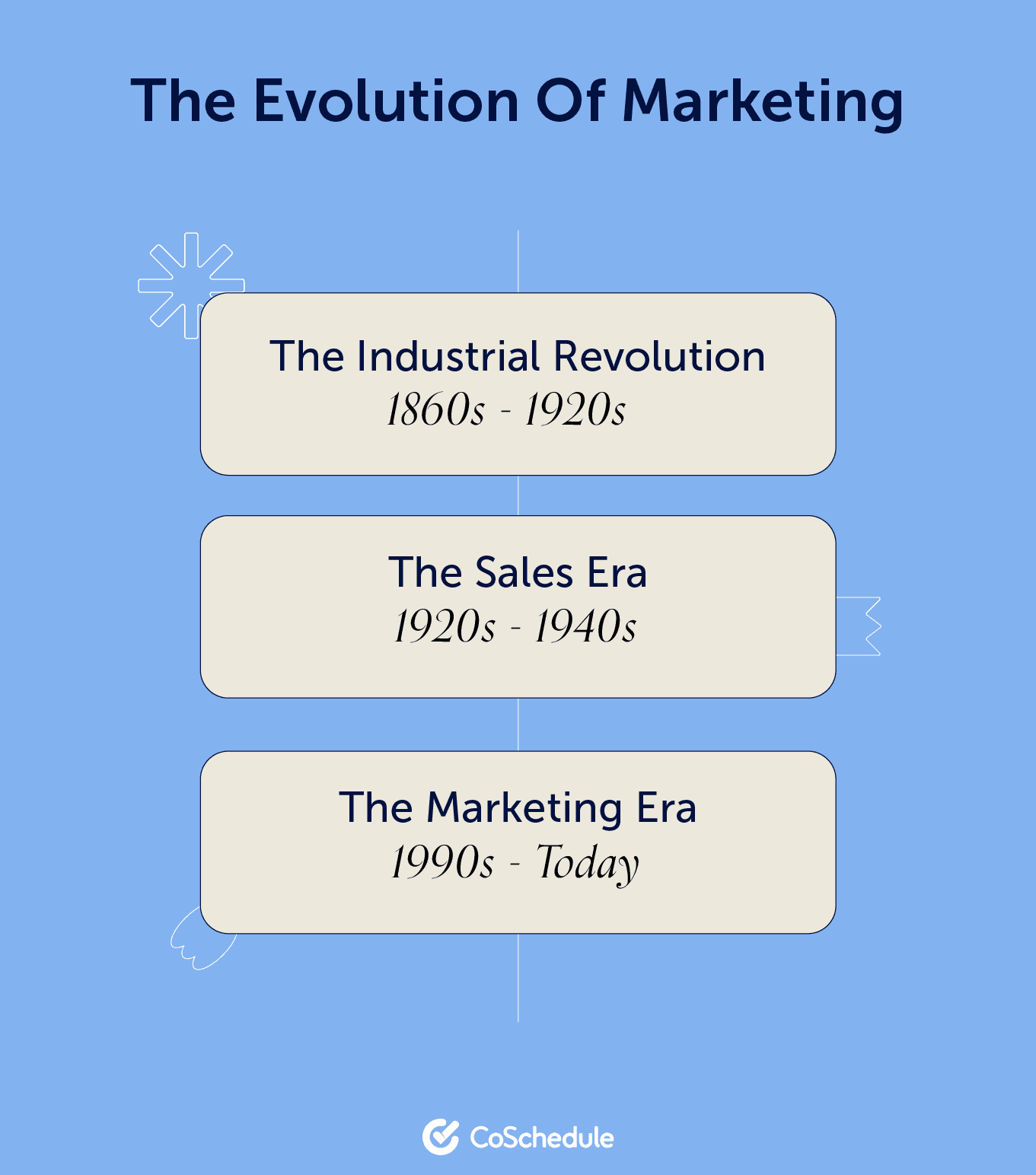 We’ll begin our look into the history of marketing with the Industrial Revolution between the 1860s and 1920s. It was a period of unprecedented change in the way goods were produced.

With the advent of new technologies, mass production became possible for the first time, and factories could generate greater quantities of goods more efficiently than ever before.

This technology greatly impacted marketing, as businesses could now reach a much wider audience. The mass production of goods also decreased prices, making them more affordable for consumers.

As a result, the industrial revolution era was a pivotal time for marketing, as it laid the foundations for modern mass-marketing techniques.

Auto manufacturer Ford was among the first companies to benefit from the industrial revolution. They created an assembly line that made the production of their Model T automobile much more efficient and streamlined. This allowed them to sell their cars for a lower price, making them more affordable to the average consumer.

Only a little was needed in terms of marketing or sales tactics during this era, as demand was high and competition was scarce.

The Sales Era (the 1920s – 1940s) was a time when more and more companies were competing for customers. The competitive landscape had started to evolve, and new companies were trying to take market share from established businesses.

The main goal during the Sales Era was simply to sell as many units as possible. In most cases, neither customer experience nor product or service quality was top of mind. Companies used eye-catching sales promotions, radio commercials, and door-to-door sales to entice customers to make a purchase.

For instance, Proctor and Gamble noticed in 1929 that orders were cut and inventory was piling up. Therefore, they started seeking new marketing avenues and chose radio broadcasts to communicate with their target audience. These ads became widely successful and were a critical reason that Proctor and Gamble survived the Great Depression when so many other companies did not.

The Marketing Era began to take shape in the 1990s and is still a predominant part of the marketing ecosystem. This era is all about understanding the needs of your target customers and then effectively customizing your marketing activities to address those needs.

We now know it’s much more effective to focus on quality over quantity regarding your customer base. By understanding your target customers’ specific needs and tailoring your marketing activities to address those needs, you’ll achieve much better results and higher lifetime value.

Take Apple computers, for instance. They differentiated themselves by creating a superior customer experience to their competitors. And as a result, they were able to capture a large share of the market.

As they highlighted in the commercial below, the “best” computer isn’t the one with the most memory or megahertz but rather the one that people use.

The Rise Of Digital Marketing

The rise of digital marketing has been meteoric. In the early 1990s, only a small fraction of people had access to the internet. Today, almost half the world’s population is online—these milestones shaped how digital marketing looks today.

Personal computers were a watershed moment in the evolution of digital marketing. Before the widespread adoption of PCs, marketing was primarily analog, relying on print, television, and radio. However, the advent of the PC opened up new possibilities for marketers.

As the internet grew in popularity, new digital marketing ideas were forming. Take the million-dollar homepage. This site was created in 2005 and sold advertising space on a website with one million pixels for $1 per pixel.

It’s hard to believe that it’s been just 15 years since the first iPhone was released. In the short time since then, smartphones have changed the way we live, work, and play. They’ve also had a significant impact on digital marketing.

Thanks to smartphones, businesses naturally increased their visibility simply because consumers were browsing online much more frequently—thus being exposed to more advertisements or branded content.

Social media platforms like Facebook, Twitter, and Instagram have wholly transformed the marketing landscape. With the advent of social media, companies can reach consumers on their mobile devices, where they spend an increasing amount of time.

Social media platforms provide a way for brands to connect with consumers, build relationships, and target them with ads for a relatively low cost.

Through interesting content, targeted ads, and a solid social media presence, Dollar Shave Club has built a loyal follower base (3.6 million on Facebook) that keeps coming back for more.

Timeline: The History Of Marketing Mediums

In the marketing world, some brands are known for their staying power, while others are more fleeting. But now and then, a brand comes along that totally changes the game, and their impact is felt for years to come.

In this section, we’ll look at some of the brands that have changed marketing forever.

Burma-Shave Company: The Popularization of Billboards

Burma-Shave was an American shaving cream company known for its funny roadside signage. The company was founded in 1925 and soon became famous for its clever advertising slogans.

Burma-Shave signs were typically made up of six small panels containing a fragment of a rhyming verse. Motorists read the verses as they drove past the signs, and the final panel always contained the Burma-Shave logo.

This marketing strategy worked incredibly well for brand recognition and helped them reach the number two position among shaving creams. Just think, if you were in the supermarket trying to decide between two shaving cream brands, one whose signs you’ve seen countless times and one that you’ve never heard of, which brand would you choose?

In 1963, the company was sold to Philip Morris, and the signs were gradually phased out. However, Burma-Shave is still remembered fondly by many Americans who grew up seeing its clever ads along the highways.

It’s hard to talk about the history of marketing and not mention Coca-Cola.

Coca-Cola is one of the most popular soft drinks in the world. The company was founded in 1886, when the drink was first introduced at a pharmacy in Atlanta, Georgia. Since then, Coca-Cola has become a global brand, and its distinctive red-and-white logo is recognized globally.

Coca-Cola has had a significant impact on marketing and advertising. From its early days in the late 1890s of putting its logo on clocks, calendars, wallets, etc., to now spending, on average, $4 billion per year in advertising.

Coca-Cola’s advertising campaigns have been hugely successful, and the company is often credited with inventing modern marketing techniques such as product placement and celebrity endorsements.

Thanks to its innovative marketing strategies, Coca-Cola is one of the most iconic brands in the world.

The Army’s marketing efforts have evolved. In recent years, the Army has employed a multi-channel approach to marketing, using traditional channels like TV and radio, as well as digital channels like social media and online advertising.

However, during World War I, the US Army used print advertising to help attract new recruits. One of the most iconic print advertisements of its time was the “I Want You” poster, printed over 4 million times. The poster featured a stern and powerful version of the character Uncle Sam.

During World War II, the Army ran another highly successful recruitment campaign featuring the iconic “We Can Do It!” poster. This poster portrayed a strong woman worker and was used to attract women to work in military factories to help produce planes, tanks, and munitions.

Overall, with great success, US Army recruitment campaigns have employed various stand-out messaging techniques over the years. Using bold slogans, posters, and other visuals helps communicate that the Army is looking for individuals willing to put their country first and serve their fellow citizens.

Disney: The Masters Of Storytelling

Disney has been making magical stories for both children and adults since 1923.

They’ve consistently been able to captivate audiences with their unique blend of fantasy and reality, producing some of the most iconic films, characters, and theme parks in the world.

Disney’s commitment to storytelling has been a major part of its marketing strategy. Combined with the company’s clever merchandising, branding, and advertising, this has helped turn their products and services into global juggernauts.

From Mickey Mouse hats to Disneyland T-shirts, few brands are more recognizable or beloved than Disney.

The Marlboro Man: Sell A Lifestyle, Not A Product

When most people think of the Marlboro Man, they think of a rugged cowboy smoking a cigarette. However, the Marlboro Man was much more than just a marketing gimmick. He represented an entire lifestyle that smokers aspired to.

For decades, the Marlboro Man was used to sell the idea that smoking is not just a way to relax, but a way to live life to the fullest. And it’s worked.

Where We Are Today: A Shift In The Digital Marketing Era

When you look back on the history of marketing, you’ll notice that many marketing strategies focused on outbound marketing to attract customers. Whether that be telemarketing, paid ads, billboards, etc.

However, these days, the consumer isn’t as interested in being sold to and prefers the opportunity to perform their own research and make an informed decision.

That’s where inbound marketing comes in. Inbound marketing is a marketing strategy focusing on attracting customers through relevant and helpful content. This content can be anything from infographics and blog articles to YouTube videos and podcasts.

Businesses of all sizes are investing in inbound marketing strategies. Take the healthy snack delivery service, SnackNation, for example. They reached the #1 spot for a relevant keyword, translating into $100k in monthly recurring revenue.

SnackNation certainly isn’t the only brand taking advantage of SEO marketing. In fact, according to Yahoo, the global agencies’ SEO market is expected to grow from $41.97 billion in 2021 to $51.25 billion in 2022.

Although inbound marketing isn’t one size fits all, it’s a great option to consider, thanks to its ability to generate high ROI for years to come.

Megan is a Product Marketing Specialist at CoSchedule, where she focuses on creating action-oriented, results-driven marketing. She’s passionate about building connections through engaging content.