Disney enjoys the benefits of being an established brand with instant name recognition and a massive following. But that doesn’t mean their marketing successes aren’t applicable to others looking to grow their brand and audience.

In this post we’ll explore 1) a brief history of the storytelling giant, 2) the marketing strategies that have made Disney a massively successful brand, and 3) how marketers can take those strategies and apply them to promoting their own brand. But first…

The Walt Disney Company started in 1923 in a small studio in Los Angeles. There Walt Disney and his brother Roy worked with a small team to create short live-action animation films while steadily growing their team and expanding into new ventures.

By 1928 Mickey Mouse was ‘born’. He was followed soon after by Goofy, Donald Duck, Pluto, and the rest of the original Disney gang, all of whom were a hit in Disney’s new animated shorts. 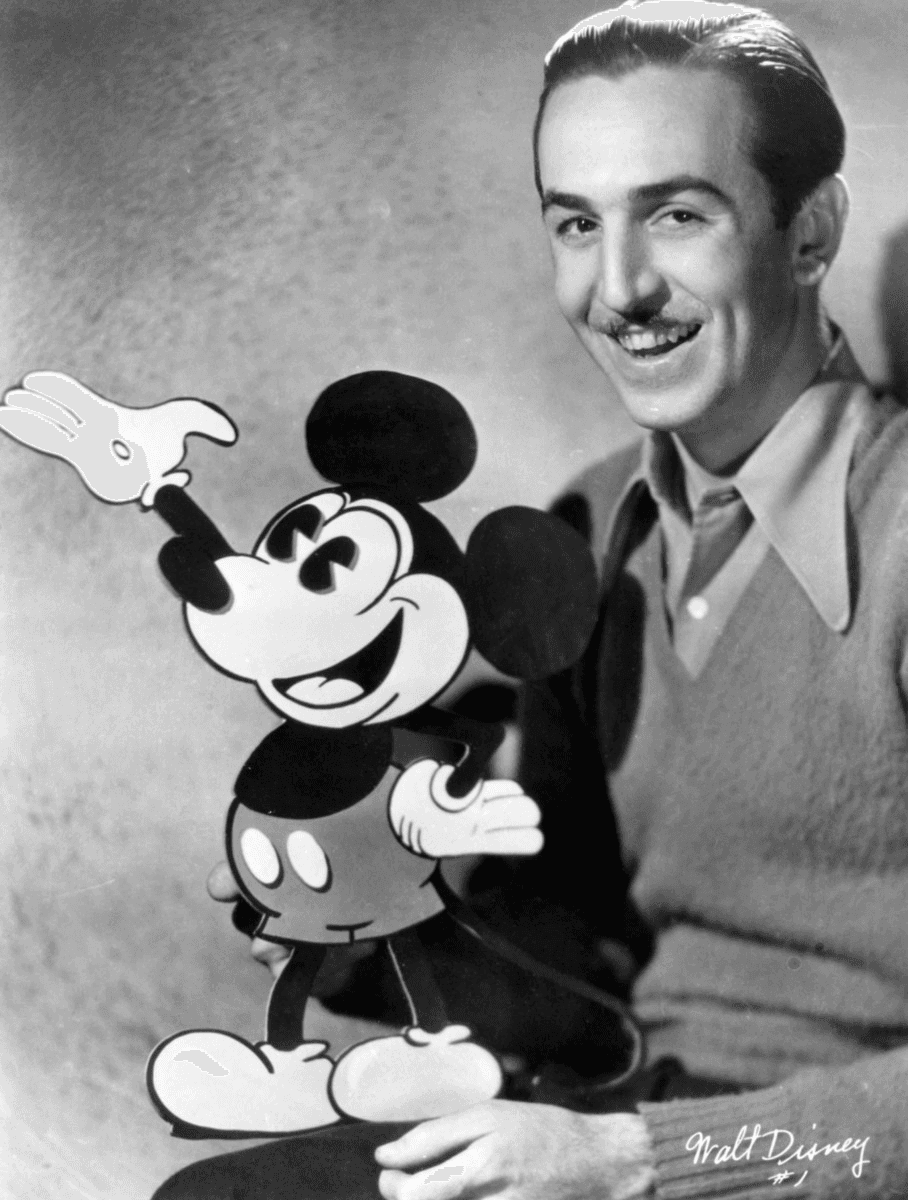 In 1937 Disney Studios’ first full-length animated feature, Snow White and the Seven Dwarves, was released to critical acclaim and success. The film netted enough money that Disney decided to move his studio to a new 51-acre lot in Burbank, where they began creating more feature-length animated films.

The Disney Studio in Burbank – Source

In the 1940s and 50s, many classic Disney films were produced out of this studio, including Fantasia, Bambi, Cinderella, Alice in Wonderland, and Peter Pan.

From this point on Disney grew at a rapid pace, going on to become the all-encompassing entertainment company it is today.

For a complete look at the history of Disney from 1923 up to the present day, check out this complete history from the Disney archives.

Before we dive into the marketing strategies that define Disney’s massive success, let’s cover their basic marketing mix.

The first Disney products that come to mind are its movies and TV series, but the global conglomerate has grown and now encompasses an increasing variety of product lines. These include:

With a wide variety of products in different mediums, Disney must use a variety of places to distribute their products. These include:

Disney uses different strategies depending on the product being promoted and to which audience they are promoting. The strategies listed below are used within a combination of international, regional, and local promotions to reach a broad audience.

These are the primary promotional strategies used by Disney to promote their products:

The 4 Marketing Strategies That Make Disney A Magical Brand

Disney’s magical success has been anything but. These are a few of the marketing concepts and strategies they’ve used to become the multinational media conglomerate they are today.

The reason Disney movies and shows are so successful is because, despite the company’s proclivity for out-of-this-world settings and magical plotlines, they create stories that are relatable and inspiring for their audience.

In this way, Disney is able to attract a broad audience and ensure their releases continue to see massive success.

One thing Disney has going for it is the power of nostalgia. They do this by infusing references and connections to childhood favorites into each new movie or show they release.

Disney’s takeover of the Star Wars franchise is a perfect example of this. Using callbacks to the original movies which many people have nostalgic memories of, Disney has been able to draw in a whole new audience of both Star Wars and Disney fans; The power of nostalgia has kept this famous franchise going in a new era.

Another reason Disney has found continued success over the decades is because they have found a way to appeal to all age ranges and demographics with their content.

This is because they employ a multi-channel marketing strategy, in which they target content to certain audiences using channels that those audiences use.

As a kid growing up in the early 2000s, Disney channel was a constant presence in my life. At the same time that I was watching Suite Life of Zack and Cody, however, Disney was working on major motion pictures, live-action movies, and documentaries which I never would have watched.

By using their multitude of channels and outlets to create content targeted towards the audiences on each channel, Disney has been able to appeal to a huge swath of the population while still creating content that resonates with targeted audience segments.

Why are Disney’s theme parks so popular? It’s not the rides — you can find those all over the place. It’s not the long lines. It’s certainly not the overpriced food.

No, the reason Disney theme parks are so successful is because they present the brand’s themes, characters, and persona to visitors in a consistent, unforgettable experience.

Take for example the characters at different parks across the world. If you get a signature from Moana in Disneyworld California and at Disneyworld Taiwan, the two will be eerily similar if not outright identical.

These people obviously don’t have the same signature, but their training and attention to detail is unmatched, resulting in a consistent experience portraying the Disney brand no matter where you are.

What Can Marketers Learn From Disney’s Marketing Strategy?

Finally, time for the ultimate question: what can you learn and take away from Disney’s marketing strategy and success?

1. Tell Stories That Connect With Your Audience

The reason Disney has such broad reach across ages and demographics is because they create inspiring stories that allow people to connect with their characters and plot lines.

As a marketer, it is your job to tell stories tailored to your audience within all of your content.

Identify your target personas, find their main use cases for your product, identify their needs, and then create content that solves their problems or provides resources to assist them in their work.

2. Infuse Your Marketing With Nostalgia

When people feel good while consuming your content, they’re more likely to trust you and come back time and time again for more.

As such, you should try to infuse nostalgia into your marketing operations. Along with this, use your content to make references to relatable situations and experiences for your primary audience.

In doing so you will build a relationship with your audience, who will associate your brand with good feelings and come back for more.

3. Reach Your Target Audience Where They Are

Since Disney has such a broad audience, they market each of their individual projects to certain audiences. To do so effectively, they use different channels to market each one based on extensive audience research to find which channels each of their target demographics use.

So, start by doing audience research. Then find the channels your target audience uses.

Once you know who your audience is and where they hang out, you can create high-quality, engaging content perfectly tailored to them and those channels.

4. Place Your Brand Persona At The Forefront Of Your Content

Your brand’s personality should play a central role in your marketing efforts if you want your audience to connect with and trust what you have to say. Disney does this better than everyone else, especially at their parks.

For your brand, you should ensure that you have a dedicated style guide and stick to it. In addition, you should clearly define your company’s values and overarching ideology and make it evident within your brand promotional materials.

Now, it’s time to take the lessons you’ve learned from Disney’s marketing strategy and apply them to your own internal marketing operations.

Owen Piehl is a former Content Specialist for CoSchedule. He is an avid writer, musician, and advocate for community outreach. When he’s not hard at work creating actionable content, he can be found playing his ukulele or riding his bike around the streets of Fargo.