Nearly 20 years ago, while surfing waves in Australia, Nick Woodman had an idea: a photography tool capable of capturing epic moments.

He didn’t have high expectations of creating something special — heck — he barely had a developed idea. But over time, his feeble thought would transform into a multi-billion dollar company.

GoPro is a wearable camera and accessory company specializing in high-quality athletic photography.

The brand, which is synonymous with adventure, has become one of technology’s biggest success stories.

In 2012, GoPro held 42 percent of the total market share for action cameras, far surpassing its competitors, including Ion (12%) and Sony (8%).

As of 2021, it boasts an 89 percent market share in the action camera industry, and the company is currently valued at $800 million.

But how did GoPro rise to the top?

Since its inception, the brand has placed customer experience at the forefront of its marketing strategy.

In 2001, before the start of the mobile revolution, Nick Woodman – a surfer, skier, and motorsport enthusiast – grew frustrated by the lack of durable photography tools.

With ambitions of becoming a surfing pro, he wanted to capture the “hero” action shots, but no product on the market stood capable.

After a surfing trip cemented a need for such a product to exist, Woodman attempted to create a solution.

And at first, the vision was simple: turn an old wetsuit into a DIY camera wrist strap. The design, however, tremendously failed.

Woodman realized the straps alone were not a revolutionary product. For his design to work, he would need to find a durable camera and build a waterproof house around it.

By 2004, GoPro was ready to launch its first camera: A 35mm waterproof device made in China for approximately $3. Selling each unit for $30, GoPro closed $350,000 in sales within the year.

Over time, GoPro continued perfecting its product while introducing many incredible technological advancements.

As of 2022, GoPro remains a top brand with a global footprint, beloved by millions worldwide – and, at least so far, standing up to stiff competition and fast-paced technological change. 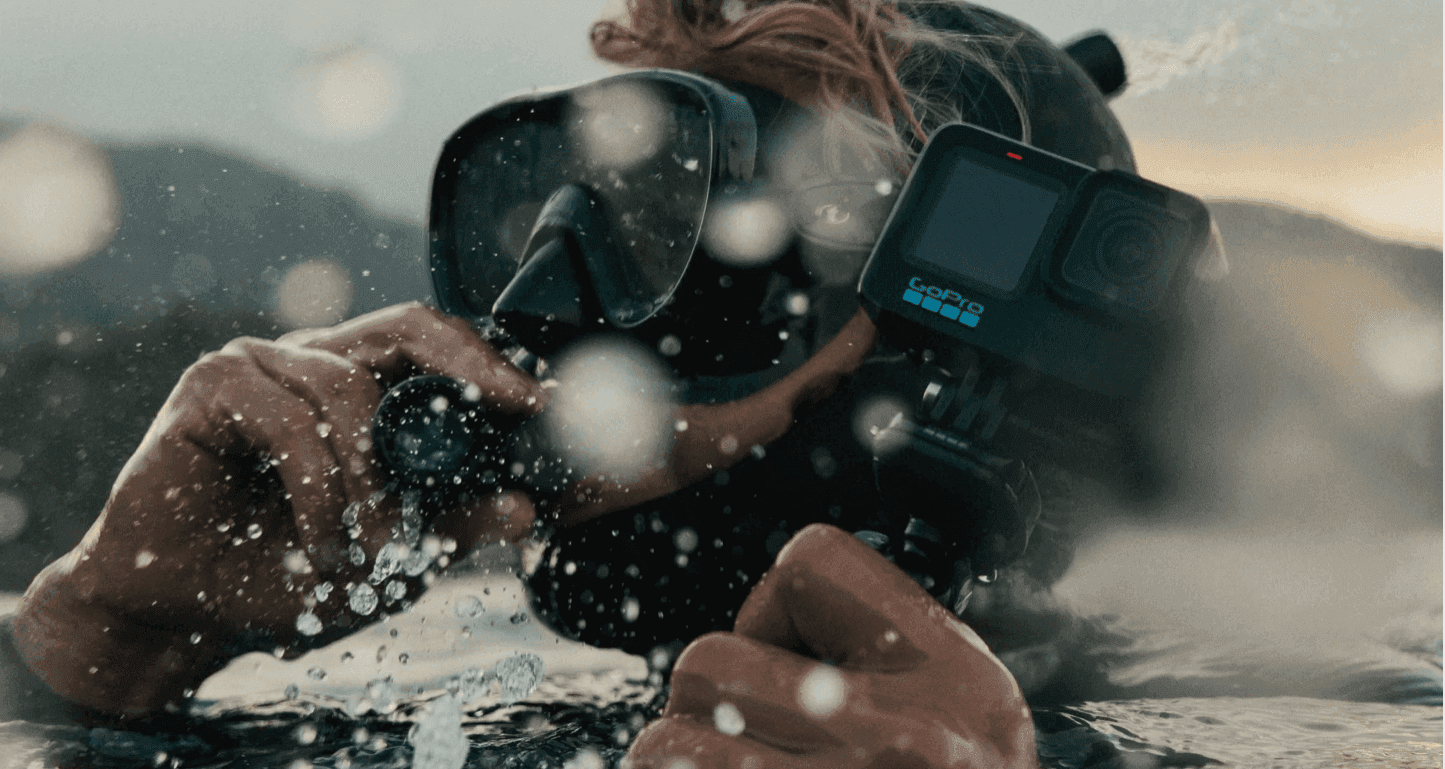 GoPro is a portable action camera.

Intended to capture epic content, the device shoots in full HD video and is entirely shockproof and waterproof. Its small size and durable body allow for versatile use in all action and adventure sports.

The company additionally sells accessories to facilitate camera use (i.e., mounting devices to attach the GoPro to a helmet, handlebar, or surfboard).

Furthermore, the GoPro Quik app – a video editing, curating, and sharing tool – is available for purchase on Android and iOS devices.

While the average price of a GoPro falls around $400, the cost is entirely dependent on the model chosen; if the price increases, the battery life, image sensors, and megapixels follow pursuit.

The cost, however, does not include a memory card or a mounting device – both necessary tools for camera use and function.

All GoPro Products are available for purchase via its online website or an electronic carrier store.

GoPro has primarily used social media and user-generated content in its promotion.

And their strategy? Instead of advertising for consumers, show the product being used by consumers. Real people, organic content.

In 2020, while the coronavirus wreaked havoc on the world, GoPro celebrated being homebound.

Millions of individuals across the world joined the challenge. And by sharing uplifting content in an uncertain time, GoPro spreads pockets of positivity.

A cameraperson may not be able to sit on a halfpipe wall, but a GoPro certainly can.

Reaching over 1.5 million people, viewers saw the master in action and were left inspired.

An energy drink and a camera business may have little in common, but the strategic partnership between GoPro and Red Bull is difficult to beat.

Both brands convey a brilliant sense of adventure and spontaneousness – creating the perfect duo for thrill seekers.

“As partners, Red Bull and GoPro will amplify our collective international reach, the power of our content, and ability to fascinate,” said Dietrich Mateschitz, founder and CEO of Red Bull.

And he wasn’t wrong.

The alliance immediately caught consumer attention and encouraged the world to “live a bigger life.”

User-generated content (UGC) is any form of content created and shared by consumers – and it has created a recipe for marketing success.

The award system asks users to participate in various challenges such as the “Photo of the Day Challenge” or “Be a HERO Challenge.” And to the victor belong the spoils!

The adventurous (and sometimes death-defying) content is uploaded across GoPro’s social channels.

The average person shares sixteen thousand words per day. And every hour, there are roughly one hundred million conversations about brands.

Word-of-mouth marketing – passing information from person to person – remains one of the most powerful ways to influence business results.

But what causes someone to talk about your product?

GoPro has used its camera to turn customers into talking advertisements.

The Four Requirements of a Talk Trigger

GoPro footage allows customers to share legendary life experiences. And while everyone is watching someone skydive out of a plane in Australia, what is always subliminally discussed? The GoPro camera.

A slogan – a short, attention-grabbing statement – shares the company’s reason for existence.

Think Nike. The slogan ‘Just Do It’ is a core component of the athletic brand. Additionally, it has ignited people to better themselves in all spheres of life.

Similarly, “Be a Hero” encourages people to become the hero of their own lives—undoubtedly a strong brand positioning for GoPro.

4. Deliver With The Audience In Mind

The final key to GoPro’s marketing strategy lies in distribution.

Marketers understand how audiences engage on different social channels in different ways. But most marketers fail to tailor distribution strategies to accommodate the differences.

GoPro has taken distribution to heart, dispersing content with the audience in mind.

Noting 85% of Pinterest users are female, GoPro skews its content there for a female audience. The brand uses #GoProGirl to feature women using GoPro Cameras. ‘Family time’ shares pictures of kids and babies, and ‘Love’ features images from GoPros used at weddings.

This strategy ultimately helps the brand appear more authentic to its target audience.

Now you have the steps to marketing success. GoPro’s marketing strategy can remind you to think big and look outside the box when brainstorming ways to advertise your brand. Consider your target audience, be creative in your promotion, and lean into your brand. You’ve got this!

Student at Minnesota State University Moorhead, pursuing a degree in Integrated Advertising and Public Relations, Kate is a Content Specialist at CoSchedule. She is an avid coffee drinker and enjoys writing.