Boom boxes and cassette tapes have been traded in for the convenience of online platforms. And who is the company that first revolutionized traditional forms of music consumption? Spotify.

Since its inception in 2006, the company has justifiably grown to 433 million monthly active users. As of 2022, it now controls 31 percent of the global streaming market, more than double its nearest competitor, Apple Music.

How did the platform accomplish such an impressive feat in under a decade and a half?

Its journey to success has been a challenging ride. Despite facing a substantial data leak and backlash from global music icons, Spotify remains the market leader in audio streaming by a significant margin.

Ultimately, its success can be attributed to a kickass marketing strategy.

The History Of Spotify

In the early 2000s, $3 billion in lost revenue slipped through the hands of recording labels due to illegal music downloading. Despite vigorous legal and technological efforts by publishers and the recording industry, music piracy continued to grow.

By 2006, Daniel Ek and Martin Lorentzon saw a solution – and a profitable opportunity – in audio streaming.

Within the year, they developed Spotify to compensate artists and combat music piracy.

As a small Swedish startup, Spotify was publicly launched in 2008 – by invitation only – to a few select countries. One year later, it expanded its services across various parts of Europe. By 2011, the platform launched in the United States.

To date, Spotify is available across 180 countries with a current business valuation of $17 billion.

Each month, 433 million users tune in to Spotify to explore its 80 million music tracks. 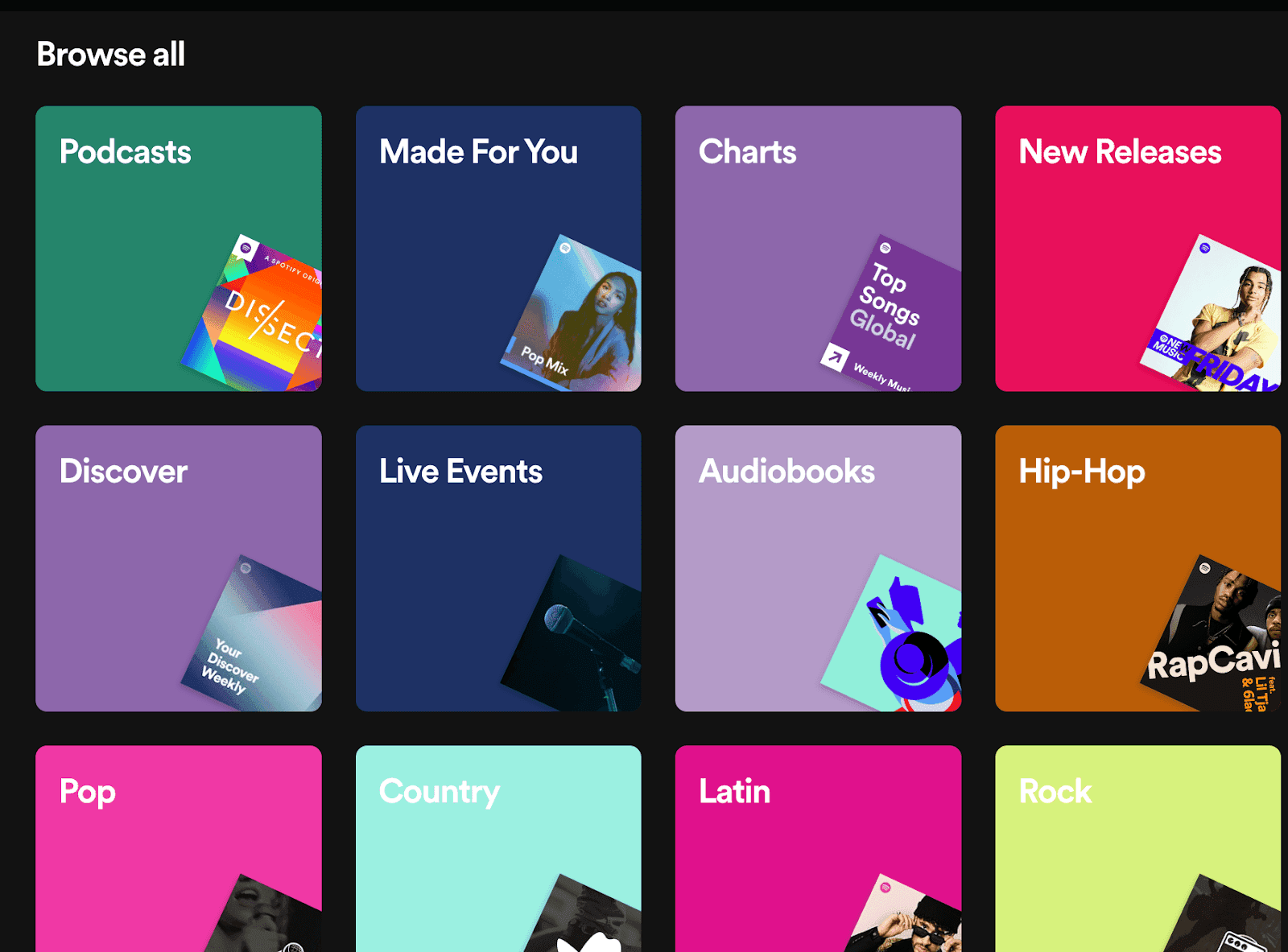 Unlike its competitors, a free subscription service is available for all Spotify users. This freemium pricing strategy has worked well to develop a user base, increase revenue, and grow a higher premium subscription rate.

Spotify can be accessed anywhere at any time via its downloadable application or online platform. While the internet is needed, an offline option is available for paid subscribers.

Spotify has primarily used social media, particularly Facebook, in its promotion. With nearly 24 million Meta followers and an impressive presence on Twitter, the company uses its channels to bolster brand awareness and drive engagement.

Its focus on affordability and stellar user experience has led to widespread word-of-mouth marketing.

6 Spotify Marketing Strategy Approaches To Help Inspire Your Own

In terms of a marketing strategy, Spotify takes an active approach.

While most companies build on a previously established marketing platform for years, Spotify changes its marketing techniques yearly. This ever-evolving viewpoint has led to the company’s rapid growth.

In a saturated market, personalization – creating customized content for consumers – is essential to remaining a competitive business player.

In 2016, Spotify re-conceptualized its AI interface to personalize it per user. This ensures each individual receives tailored content (i.e. pre-made personalized playlists) based on listening history.

The impact – and potential – of personalized marketing is building a connection between the platform and its users. By collecting and effectively using consumer behavioral data, Spotify crafted its experience to an individual’s taste.

Most marketing concepts are tried and true and will likely never change. But somehow, that doesn’t prevent marketing from evolving in adjustment to current trends.

2016 was an odd year. In the United States, the election of President Donald Trump embroiled the nation in political debate. The United Kingdom’s withdrawal from the European Union created a heated struggle in Europe. And the cherry on top, Leonardo DiCaprio, finally won an Oscar.

Recognizing the oddity of the year, Spotify created billboards to poke fun at users who listened to different songs. On the bottom of the billboards, “Thanks, 2016. It’s been weird” was written in black lettering.

3. Partner With Other Brands

And leading the pack – and not just the pack of music streaming companies, though, there’s that too – Spotify.

As of 2022, 76 companies across the globe have joined Spotify’s partnership ecosystem.

Among these epic collaborations, the fan favorite remains the 2015 crossover between Spotify and Starbucks.

This innovative partnership encouraged the active participation of consumers and ultimately enhanced both entities.

Social media trends harness the power to viralize a business.

In 2018, an auditory illusion was posted on Reddit. While some listeners claimed a man was saying the name “Yanny,” in an audio clip, others were certain it was the word “Laurel.”

The clip exploded across social media, and millions of people joined the conversation.

Spotify noticed the trend and decided to create a new billboard.

Once again, the brand’s innovation proved successful and caught the attention of social media.

Recommended Reading: How To Write The Best Social Media Posts

5. Test Out A Freemium Model

Freemium is a pricing strategy by which a basic service is provided free of charge.

Offering a limited, ad-supported music service for free, freemium remains to be the distinct feature that separates Spotify from its competitors.

While nearly half of its users opt for the free version, the supported ads contribute to Spotify’s revenue stream. Additionally, the freemium business model produces a 46 percent conversion rate from free to paid users.

Consistency in brand identity generates trust and creates a positive perception of service.

In response to the minimalist trend in the early 2000s, Spotify created a simple theme. But its logo is remarkably plain for a brand whose very niche is music and innovation.

Yet, the simple, crooked WiFi emblem has represented the company for fifteen years.

Curious as to why?

As the platform exploded in popularity, Spotify became known for its warped icon. Throughout time, the company underwent several rebranding efforts to express creativity. However, the original logo remained intact to offer a sense of familiarity to its subscribers.

Student at Minnesota State University Moorhead, pursuing a degree in Integrated Advertising and Public Relations, Kate is a Content Specialist at CoSchedule. She is an avid coffee drinker, active learner, and enjoys writing.